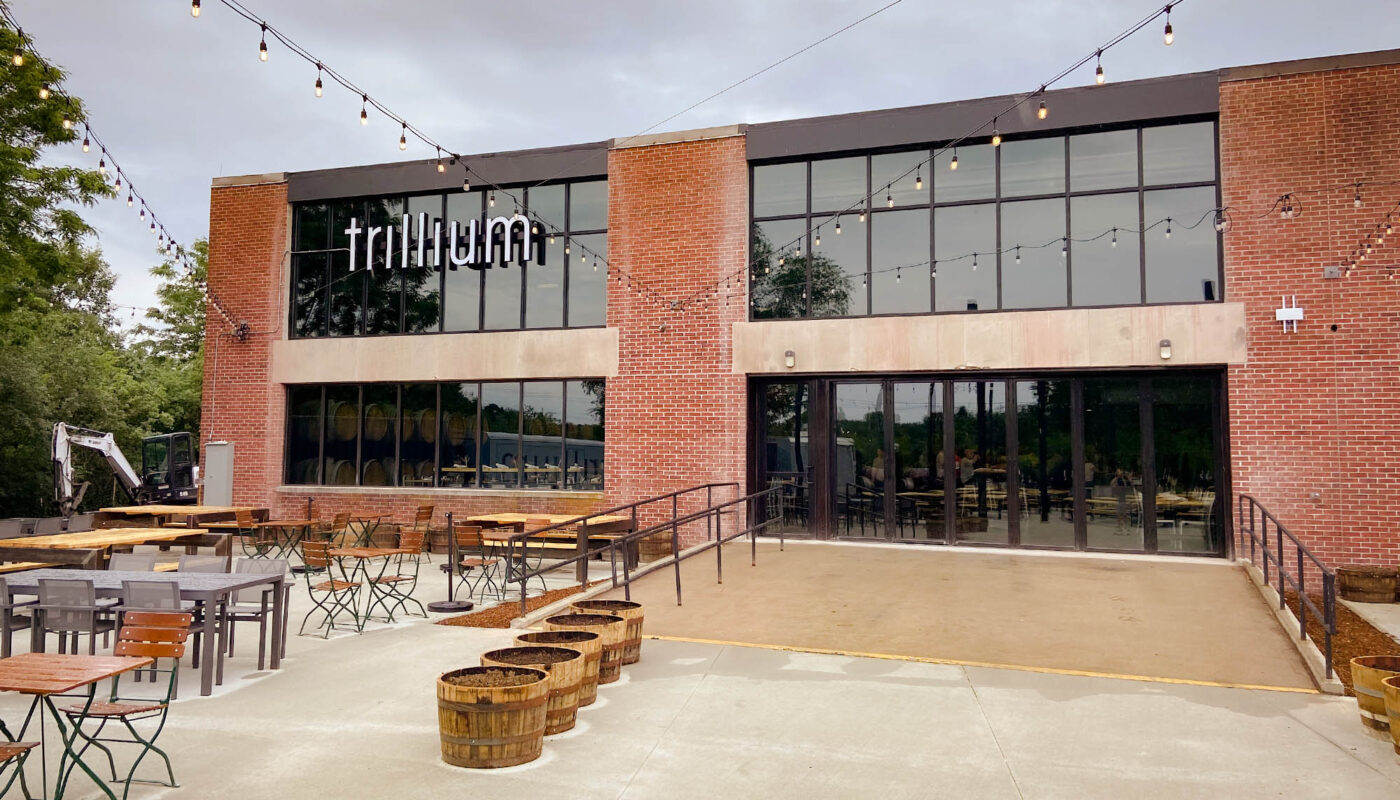 I’m really lucky to live a town over and only about 20 minutes from the infamous Trillium Brewing Company. I drink a tremendous amount of their stuff and they’ve always held a special place in my heart in terms of craft beer. I think it’s because they produced the first New England Style IPAs that really got me into hazy IPAs. Personally, there’s a bit of nostalgia wired into every sip of their beers.

I’ve been a long-time visitor of Trillium’s first Congress Street location, an early adopter of their Fort Point restaurant in the Seaport, and a frequenter of their old Shawmut Road location near my home. Trillium just opened the doors this month to their brand new ‘forever home’ just a few miles away from their old Canton location at 100 Royall Street. The new location feels like a combo of the old Canton brewery mashed up with their Fort Point restaurant. It’s a massive building/warehouse with a tremendous amount of tables and space to hang out. I was really lucky to check the place out on their opening day and see what all the hype and anticipation was about.

Two minutes off I-95, Trilliums newest addition to the lineup is ABSOLUTELY MASSIVE without being totally overwhelming. I’ve never been to Tree House’s physical brewery in Charlton but if I had to guess it’s just as much of a compound. The new 500+ seat taproom features three main areas—a lounge-type area, a patio/outdoor area, and a full-service restaurant.

The (large) lounge/bar area has several leather couches and a long line of high-top tables where you can get draft pours and just hang out. This is also where you can pick up cans and merch to go. The lounge side of the brewery will probably remind you of the old Canton location but with a much sleeker feel and more comfortable setting. It has a more upscale feel overall and is a great spot to have a beer before a sit-down meal, which is exactly what we did. The beer lineup on the lounge/draft pours side was smaller than the restaurant side. There were several taps so I’m guessing this will evolve over time as they ramp up.

After that, we made our way over to the dining side of the brewery.

The restaurant side of the building is a very large area with what feels like hundreds of tables. I had an incredible amount of anxiety on my drive over hoping they would have room to accommodate us on such an opening night. Given the number of tables, my fears were ridiculous. My wife asked me at one point if there was a ‘wall mirror’ making the space look larger. Spoiler alert…the restaurant is actually that big and seems to just keep going past where the eye can see. The restaurant side has another bar area with some hightops where I’d imagine you can order lighter bar snacks etc.

I’ll be really curious to see what Trillium comes up with in terms of their menu over time. As of writing, the new Canton location features a handful of BBQ dishes like pulled pork and ribs along with an array of wood-fired pizzas. The menu is a little simpler than the Fort Point restaurant and has a comfort food focus. Personally, I absolutely love this approach because I’ve always felt this aspect was missing from their lineup. I’m sure they will expand the menu as they start to ramp up.

As an aside, you can still order cans/merch to go from the dining area. This was always one of my favorite perks of the outdoor patio area at the old Canton location.

The Pizza Is Really Good

If you follow me over at kitchenswagger.com you’ll quickly understand how much of a dedicated pizza snob I am. I hate generic big brand pizza delivery with a fiery passion and I’ve always been a sucker for LEGIT Italian-style pizza that’s handled with care (just like their beer). We ordered a kid’s plain cheese, a Margherita, and a loaded pork pizza with prosciutto, sausage, and pancetta. All three were really solid and of course, paired really well with a crisp beer. I was really close to ordering some BBQ spare ribs just to report on them but I failed you. Probably my biggest regret of the evening but hey….I’ll be back real soon.

The outdoor seating area is equally as massive as the indoor space. There is a tremendous amount of space to spread out and drink beers, especially if the weather is nice. Unfortunately, it was a little rainy so no one was hanging around outside. The good news is I was able to snap a few pictures without people staring at me like a total creep. To be honest, I wish I was able to get some more pictures of the inside as I can’t possibly do this place justice just by describing it.

I’d REALLY love to get a behind-the-scenes look at the actual brewing space itself but I was able to snap a picture of what I overheard was going to be the pilot brewery system. Of course, I was incredibly eager to see a handful of 1BBL Ss Unitanks an arm’s length away. I think the homebrewer in all of us will appreciate the small-scale system. I’d love to know what runs through those tanks!

Next to the pilot setup, you’ll also notice a very large lineup of oak barrels. I’m guessing this is where all of the funky beers, sours, and barrel-aged stouts are going to appear. We’ve never quite had this up-close of a look at Trillium’s brewing set up so it’s cool that they’ve started to bring some of that more into focus.

If you’ve ever been to the old Canton location you’ll understand how much of a struggle parking could be on busy weekends. The new Trillium has a tremendous amount of overflow parking and likely more than they’ll ever need. I wouldn’t be surprised if they start offering wedding packages because the entire grounds and accommodations are seriously just that big. I can absolutely understand why they made the move and I’m super eager to see how they grow into it.

For an opening day launch, we had a good time checking the place out. The new location is staffed to the gills and everyone was super friendly and welcoming. The sheer scale is a little intimidating at first but everyone was eager to help us out and point us in the right direction. I can really appreciate it as someone who visited with a 2.5-year-old toddler. For a brand new spot with everyone still getting adjusted and acclimated, everything seemed to be operating pretty smoothly. Maybe it was the atmosphere or my general state of awe, but the beer just tasted extra good today.

I already can’t wait to go back soon and highly recommend you drop by ASAP to see everything for yourself. It’s 100% everything I hoped it would be. As a dad, I’m happy to report it’s still a really family-friendly brewery visit despite being a step up from the old spot. If I can give you any advice at all, absolutely order some pizzas while you’re there. You won’t regret it—unless you like really bad pizza. 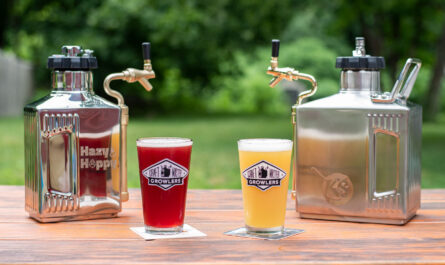 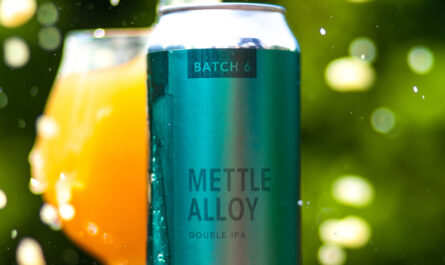 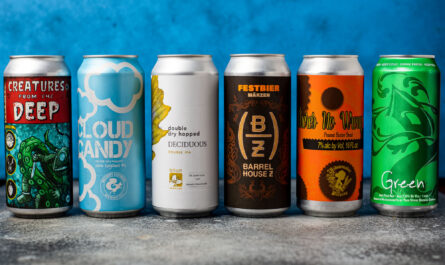