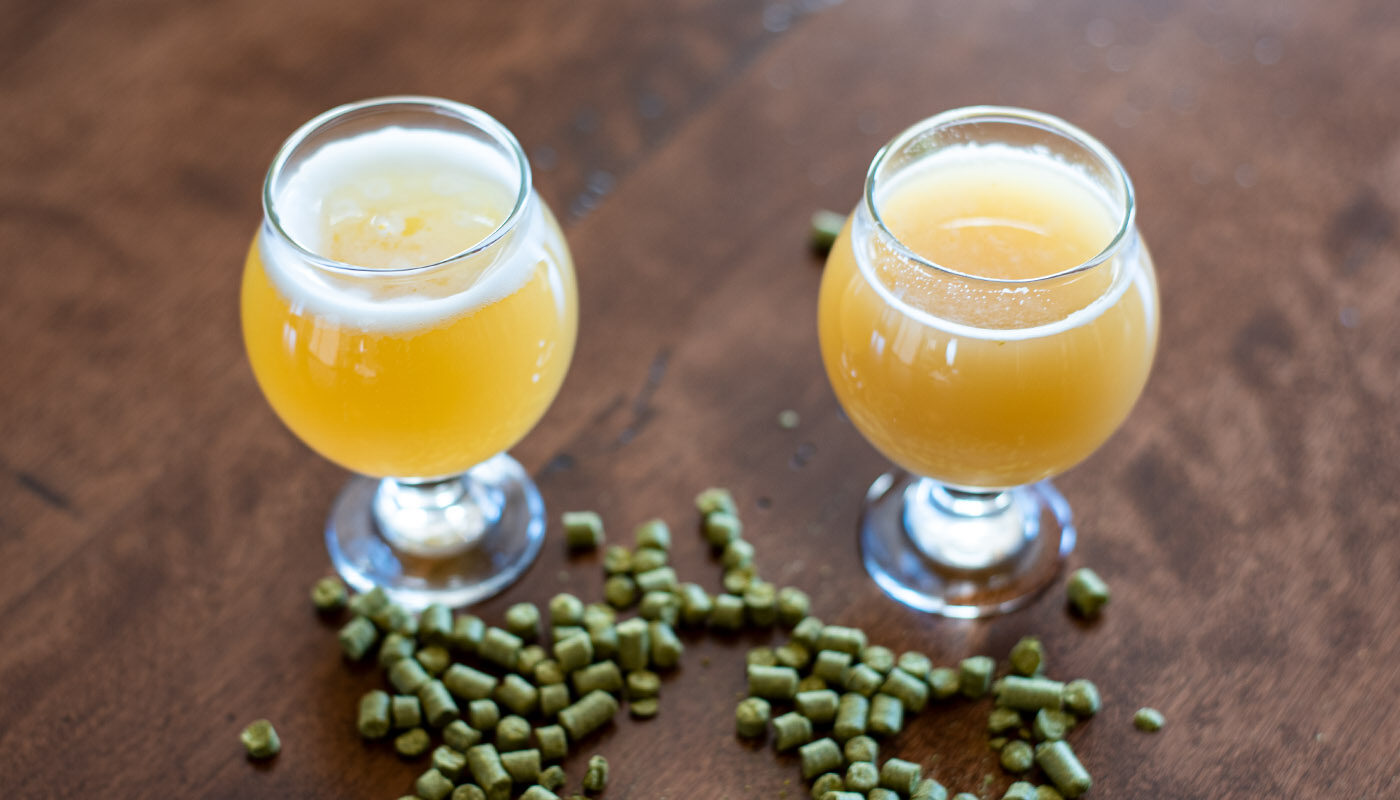 Dry hopping volume has long been a researched and debated topic in the craft beer and homebrewing world. Since the immersion of the New England IPA, breweries have been pushing the limits of dry-hopping techniques and quantities to never before seen limits. I remember back in my early days of homebrewing when a 2-ounce dry hop in an American IPA felt like a big punch of aroma.

My early NEIPA experimentation had me doubling my previous rates to 4 ounces per 5-gallon batch. This felt like ALOT of hops at the time and was bordering what most would refer to as the max saturation point or ‘all you really need’. I’ve come across a lot of anecdotal advice that usually goes against using an excessive amount of dry hops. If you’re interested in learning more about brewing NEIPAs, read this.

One phenomenon I’m really curious to explore is the saturation point of dry hops in a given beer. I would tend to agree that at a certain point, more dry hops are not going to pay off or add any additional flavor or aroma to a beer. Brulosophy ran an experiment examining dry hop saturation point and determined extra hops in the same IPA were undetectable. Clearly, there is a point where more is less.

Scott Janish has gone above and beyond per usual and has pulled together lots of data on the science behind dry hopping and has data to back there is a point of diminishing returns. He also goes on to explain that pure volume of beer, regardless of the same dry hopping rates, will change how the hops behave in solution. Scott also points out that there isn’t a relative scale when comparing homebrew vs commercial dry hopping. The evidence suggests that commercial brewers will need to dry hop for longer and in larger quantities to achieve similar extraction levels as homebrewers.

Homebrewers often rely on the pros for guidance to perfect their craft. I’ve been lucky enough to experiment with scaling down a “real” commercial NEIPA recipe and directly compare it to the actual beer. All of that aside, that’s not really the point of this article.

The Takeover of Big IPAs

I know many beer drinkers complain about the general trend of high ABV double IPAs on the market. I love double IPAs, but I’ll admit you start to feel lightheaded after drinking 32 ounces. I’m a firm believer that the double IPA craze was driven by the beer’s ability to retain and deliver intense hop character and aroma over a typical pale ale.

From an observational standpoint, I can’t say I’ve ever had a pale ale or IPA that exploded with hop flavor and aroma in the same way a double IPA does. Something about the pure richness of a high ABV beer tends to deliver more intense tropical hop flavors to your palette. What I want to understand is why higher ABV beers can afford a larger dry hop and deliver more saturated hop flavor and aroma.

I had the pleasure of chatting with Trillium’s JC last summer and came away with some interesting insight. While I would have loved to have pumped him for information on his beers…it just didn’t feel right. Plus, we ended up talking mostly about food anyway (I really love food). We did briefly chat about a DDH DIPA that I had in hand and I was explaining my fascination with the pure richness of hop flavor. This particular beer was dry-hopped at a rate of 9 lbs per barrel or 4.5 oz/gal). That’s the equivalent of 22.5 ounces in a 5-gallon batch. Let that steep for a minute.

This information is not necessarily new to me. This article here quotes JC as saying they have a “sliding scale of maximum dry hop charges based on gravity.” JC mentioned that you need a solid backbone for all of those hops to ‘cling to‘. This tip is what turned me on to this entire theory or point of realization. Maybe ABV is the missing link to retaining more hop character in my homebrew?

To get to the bottom of this as objectively as possible, I compared a high and low(er) ABV beer dry-hopped at the same rate of about 5lbs/bbl or 2.66oz/gallon (these were 6-gallon batches). The grist was the same except for a 10% increase in the total wheat/oat percentage in the higher ABV beer (40% vs 30%). From my own personal preference, bigger NEIPAs need more body to stay balanced. A disproportional amount of adjuncts could lead to thinner tasting beers.

While the hop varieties varied, both hot and cold side additions/ratios were consistent. Both batches also contained 4 ounces of LUPOMAX® hops, which I multiplied to account for the added concentration. For the sake of argument, each batch was the rough equivalent of a 1lb dry hop of standard T-90 pellets. The only other modification between the two batches was the omission of whirlfloc in the higher ABV beer. More on this later…

Both beers featured a single dry hop charge on day 4-5 of fermentation at terminal gravity. The hops were added around 68°F for 72 hours.

To summarize the high points:

I’m aware that this is not a perfect experiment. There are variable changes in yeast, grist, and hop variety. That being said, all other processes, temps, water profiles, and fermentation timelines were exactly the same. All of the hops used in this experiment are capable of delivering big hop flavor and aroma. If what I suspected was true, there should be a significant enough difference in flavor and aroma, regardless of hop selection.

The higher 8% batch had a noticeable increase in both flavor and aroma. Sampling these beers side by side revealed a significant difference in flavor and tropical qualities. I would describe the 6.8% batch as very light and citrusy, lacking body, and fairly subtle in terms of the flavor profile. The 8% batch had improved mouthfeel and a greater depth of overall flavor. Tasting in a blind tasting, these beers could be easily distinguished.

I gave my wife a sample of each beer to get her feedback. I didn’t tell her if they were commercial beers or homebrew. All I asked was which she liked better. She preferred the 8% beer and described it as “having more going on.” She agreed the 6.8% NEIPA was much lighter and less flavorful overall. She also described the 8% NEIPA as having more bitterness, which I would agree with.

Of course, I turned to the homebrewing community for answers and other feedback. Hop terpenes are a clue that could potentially offer a more scientific explanation to my findings. There are terpenes present in the essential hop oils that are responsible for flavor and aroma in beer. Per this article on Craft Beer and Brewing, these highly aromatic compounds are very water-insoluble and rarely make it to the finished product unless added during dry hopping.

So what does that mean? A greater concentration of alcohol could lead to more terpenes in solution, providing more flavor and aroma in the finished beer. This is just a theory, and I’m sure it’s not the only factor at play here. I also think malt backbone, final gravity or general richness of character are likely more complimentary to hop flavor and aroma.

I find it surprising that a 1.2% difference in alcohol would single-handedly be the only reason behind the difference in perceived flavor. There has to be another explanation as to why this beer is so much more hoppy.

Whirlfloc is another hot button when it comes to brewing NEIPAs. I was a firm believer in the practice of adding whirlfloc until it dawned on me that something was missing from my beers. Outside of pure haze production, I’ve noticed a difference in flavor, mouthfeel, and aroma when omitting whirlfloc. My personal theory is whirlfloc is knocking too many proteins out of suspension and potentially taking hop polyphenols along for the ride. Even though whirlfloc is a hot side addition, it’s ridding your wort of polyphenol binding proteins, carrying the effects to your finished product.

Using whirlfloc will dramatically reduce hop burn in a much shorter duration, leading me to believe certain flavors never have a chance to evolve over time. I know many commercial breweries claim to use hot side kettle finings, but I’m wondering if the volume of scale is having a different effect at the homebrew scale. This is a larger topic for another post I hope to expand on soon.

Overall I think this experiment revealed a lot of valuable insight. Even though there were 3 distinct variables at play (whirlfloc, grist, ABV), grist and ABV were in line with structuring higher ABV NEIPAs in general. To put it simply, a 12-ounce DH charge clearly appeared to benefit the 8% NEIPA significantly. The same DH charge likely doubled the perceived flavor and aroma in the 8% NEIPA.

12 ounces of hops in a 6.8% beer is probably a waste of hops and money, at least in the manner they were added. The key thing to note here is the last part of that sentence. There has been evidence that 2 shorter dry hops are more beneficial than single larger charges. This is due to scientific evidence that terpenes may reabsorb back into the hop matter if left on the hops for too long. If this is true, double dry hopping could be the answer to extracting more flavor out of the same amount of hops.

I’d be willing to argue that any beer could potentially benefit from two separate dry hop charges as opposed to a larger singular charge. My advice would be to always split your DH charge up and save LUPOMAX or Cryo additions for the second charge. 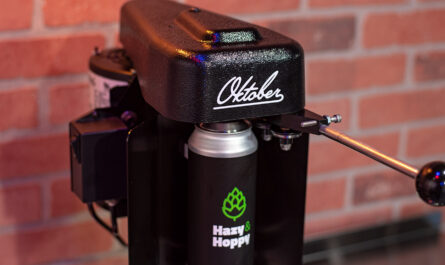 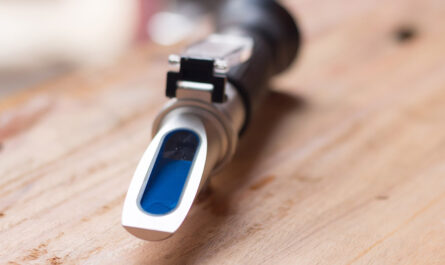 How to Use a Refractometer For Brewing 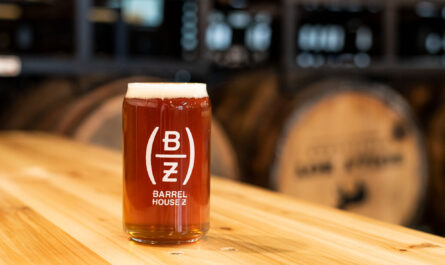 From Grain to Glass with Barrel House Z Brewery

9 thoughts on “Dry Hopping Rates and ABV in NEIPAs”